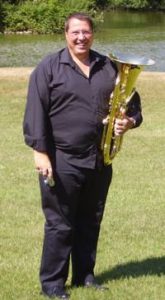 Ray started playing at the age of 8 and joined the military at the age of 16.5. He served for 24 years until his retirement from the services. Ray now works for security on the immigration contract at Heathrow airport.   He still plays euphonium in 2 concert bands but has found a marching baritone which he uses for this quintet to play the trombone parts.

Anthony learned Trombone down in the brass band world of Cornwall.  Now working for IBM in Farnborough, he plays trombone in a couple of concert bands in his spare time.  Also using his IT skills for the various band websites.   In Cactus Brass you’ll normally hear him covering the French Horn parts on Trombone.